-ZAN
投稿内容
3
作成者の他の投稿
6
いいね！してくれた人
Over the course of the nearly three decades that Puyo games have existed, many types of chaining forms have been developed. None, however, have quite risen to the prominence or notoriety of the Great Tanaka Rensa, more commonly referred to as GTR. 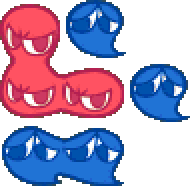 The impact that GTR has had on competitive play cannot be overstated. GTR was so revolutionary that its very existence caused puyo players to completely rethink how they built chains in order to take advantage of the form's strengths. It is for this reason that GTR has been described as the forebearer of modern Puyo. At the same time, its relative simplicity and flexbility meant that anybody could learn how to build GTR with a bit of practice - in fact, GTR has been so extensively studied that GTR build orders have been mapped out for every possible opener!

GTR is so versatile, however, that many players whether inexperienced or veteran will build it every single game. Well I'm here to say one thing...

Not only does improper use of GTR lead to building a lot of ♥♥♥♥ed up chains, beginners who are exposed to GTR early in their career of puyo popping will become worse players than those who learn it much later in their development! Before we get to why beginners should not learn GTR, we need to understand why the form is so good in the first place.

Prior to the discovery of GTR, most players focused on building chains that were four rows high, such as stairs and sandwich: 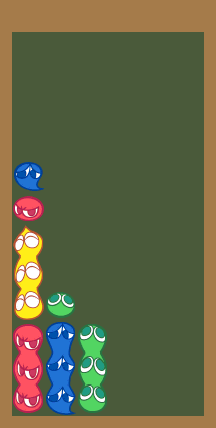 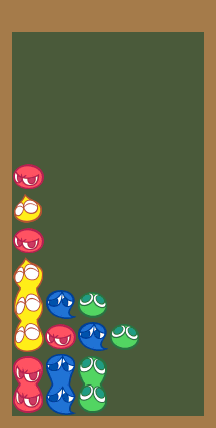 The GTR transition needs 1-2 fewer pieces to complete compared to these "tall" chains, meaning the base of the chain can be completed just slightly faster.

Uneven floors restrict the pieces a chain can accept, and often forces the player to split their puyos, costing small time losses that can build up over the course of the match.

In battles against great players, every minor roadblock hurts. GTR's flat transition is a huge boon for setting up quick and versatile chains on the second floor.

With these two benefits in mind, let's get to the root problem of why beginners have trouble with GTR:

GTR is inherently incompatible with sandwich and stairs, the only two other structured forms that beginners are able to build.

Even Sega's official Lessons in Puyo Puyo games only explicitly cover building two-column stairs and sandwich. Beginners simply have not been adequately exposed to the three column chain forms that are best compatible with GTR, much less how to build them.

But wait, you might ask, can't you easily combine GTR with stairs and sandwich like so? What's the problem? 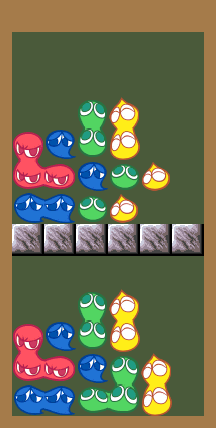 Well, yes, these builds are possible, but they are deceptively dangerous builds, and any newbies hooked by the alluring aroma of an easy chain build soon find themselves ensnared in a world of self-inflicted pain. There's two major "traps" that I see beginners fall prey to all the time when attempting to build GTR:

Let's start with a thought experiment. 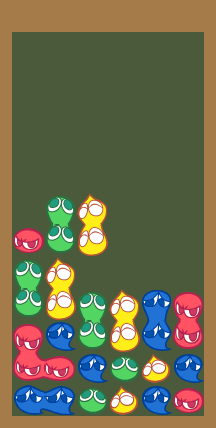 Say you wanted to maintain the height of your key puyo on the second floor, AKA where the red, green, and yellow puyos split. How would you continue to build this chain with stairs? 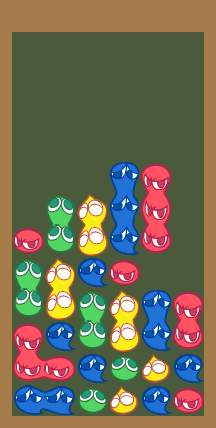 Because you're trying to combine a three row tall form with one that's four rows tall, you're forced to compromise your chain with weaker forms to compensate for the height difference.

I liken the -1 row hole due to GTR like a pit of quicksand, sucking in unsuspecting passersby. The more you struggle to pull yourself out of the trap by attempting to build upwards to compensate for the imbalanced height, the harder it becomes to escape.

The second trap with GTR is more subtle and thus more insidious. Let's focus on these two puyos here. 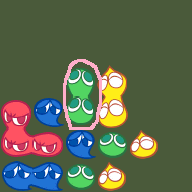 Oftentimes, when building large chains, you'll encounter pieces that just don't fit anywhere in your main chain. These pieces tend to get shoved off to the side where they hopefully won't destroy your build.

When building GTR with stairs or sandwich, what happens if you happen to throw a few annoying pieces in this fashion? 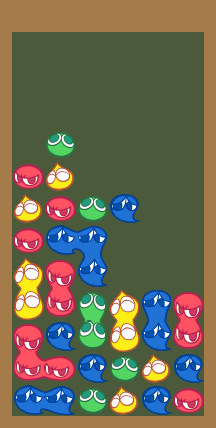 Oh no, the chain cuts!

In fact, when you look at how GTR based chains resolve, the opportunity for these chains to cut is huge! The "surface area" for color conflict is 3 whole spaces! 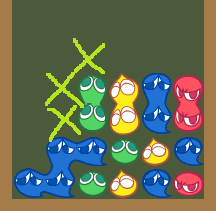 If you've ever hit your toe on a stub of wood or a nail sticking out of the ground, well, it hurts! Those two puyos you are forced to place when you combine GTR with stairs and sandwich are basically a gigantic stub waiting to smack into your chain. Ouch!

You can even combine the two traps together. In fact, this chaining error is so common among beginners that some players derisively refer to it as the "GTR Special": 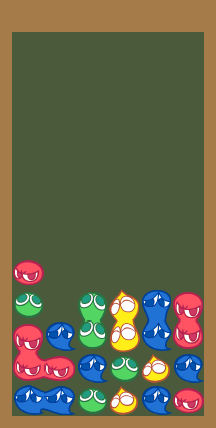 Please don't build this, ever.

(As an aside, while this is just a hunch, I also suspect 1-1-2 Sandwich is a bad form that makes it difficult to build chains efficiently. If anybody can come up with a proper explanation, I'd love to hear it.)

Now, it's quite possible for players to build around these traps. Building taller in column 1 creates an escape rope out of the quicksand trap. Being aware of the stub trap allows you to place puyos in a way that doesn't cut your chain. In fact, just by being aware of the issues, you can already start to devise strategies to build around even the most egregious of errors. For example, here's one way to fix the GTR Special. 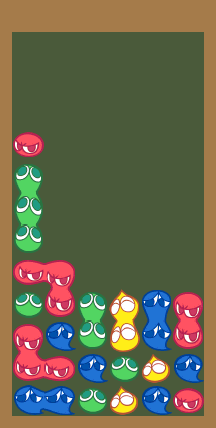 Nevertheless, the fact remains that having to play around these traps slows down your chaining even with perfect play. As a beginner trying to learn how to build big chains as quickly as possible, you need to shake off any bad habits that leave you vulnerable to attacks by the opponent and prone to making unforced errors in your chains. Stronger players will notice these weak points and tendencies, and immediately strike you down while you scramble to fix your build.

With the deficiencies of GTR in mind, what steps can you take to cast off the shackles of the GTR yoke? Well, there's two possibilities...

Essentially, you're going to learn the "real" GTR. This can be a daunting challenge for beginner players, especially those inexperienced with building unpatterned chains. If you still struggle building basic two-column stairs and sandwich, I would recommend learning the ins and outs of those first, as the three-column "joint" shapes can all be thought of as extensions of the basic two-column forms you are already familiar with.

When you're ready to start diving into three-column chaining, I think this is the best English language guide out there about the various types chains involved in these "U-Shape" bases and how to build them:
GTR For Beginners

2. Learn an alternate transition more compatible with stairs and sandwich.

This can also seem like an insurmountable task. After all, despite its flaws, GTR's benefits are still well earned. Any replacement for GTR should aim to provide as many of the same benefits as possible. The chain should also bear superficial similarities to GTR so any time spent learning GTR doesn't go to waste. Does such a chain exist?

Well, yes! In fact, let me show you not one, but two GTR alternatives! 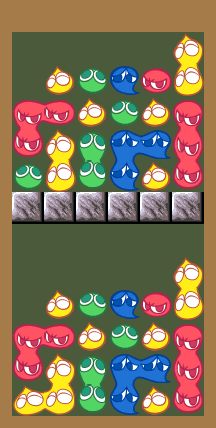 This form structurally bears some similarity to the GTR variant known as Long GTR, just smushed tall rather than stretched long. Hence the name.

Tall GTR features a -1 deep hole in column 1, which can lead to compromising situations if your chain build orders aren't up to snuff. Try aiming for this "stars and moon" setup to help flatten your second floor if you need a goal to aim for. 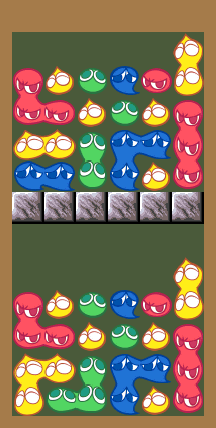 Basically, this form is just GTR raised up by one row. This allows you to take advantage of the flat second floor that GTR normally provides while still maintaining compatibility with traditional stairs and sandwich.

You may have noticed that these variants bear many similarities to GTR or L-Shape, just with a little bit of extra bulk. And like all bulky chains, building these variants induces a slight loss in chain development speed. As far as building good habits in overall chain integrity and flexibility, though, the slight tradeoff should be more than worth it. 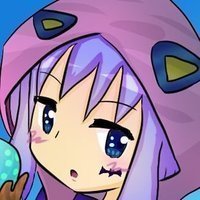 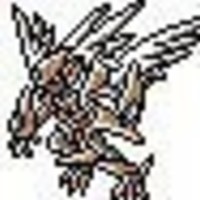